Connected with the Earth:  A Bible Study for Asbury's Worship
(April 17 & 18) 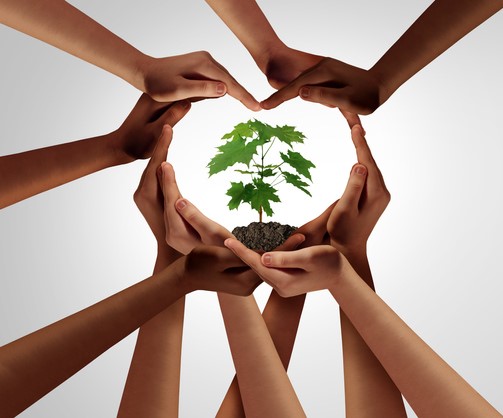 This week on Thursday, we mark the 51st celebration of Earth Day.  Over the years it has grown into a worldwide event. In 1969, a large oil spill off the Santa Barbara, California coast caused extensive damage to the ocean’s eco system, also leaving a beautiful part of the coast unusable for recreation. From the unfortunate circumstances of this event came Earth Day on April 22, 1970. The day offered participants an opportunity to renew a commitment to care for the planet upon which humans reside. I remember the day. I was in junior high. One teacher sent us out to pick up litter on the school grounds, a small but memorable moment. To mark the first Earth Day, President Nixon and First Lady Pat Nixon planted a tree on the White House grounds. Then, three months later, President Nixon proposed the establishment of the Environmental Protection Agency (EPA). By December, both houses of Congress had ratified the President’s proposal. That’s remarkable bi-partisan care of the earth. Have you participated in Earth Day activities? If so, what led you to participate?

It seems, over the years, the environment, and how we are to care for the earth, has become a political wedge. Both sides market the environment in a manner to expand their voting base. That’s unfortunate. The real loser in this shift of perspective when it comes to the environment is not one political side or the other, but the planet upon which both sides live. Oh for the good old days of President Nixon! With that said, maybe we need to step back and ask how this happened.  How did we let the earth, and our reverence and care of it, become a political hot potato? Instead of the environment being a political issue, it should be a theological one through which we better connect to God and each other. Most of us have read the Genesis stories of creation. I’m not suggesting you believe them literally, but on this Earth Day week, I am suggesting you believe what those stories in Genesis intend for you to believe: we are intimately connected, by God, to the earth upon which we live. Take a moment during this week of Earth Day and read Genesis 1 and 2. Both chapters offer an account of creation that connects humanity to the earth and the creatures that live upon it. Set aside any need to be literal. That’s a religious political wedge.  Note the manner in which God connects humanity to the earth.  We are to till it and keep it. What does this kind of connection suggest for our care of the earth upon which we all live?

When my mother was born, 49% of the country lived in a rural area. Today, that percentage is well below 20%. I wonder how this trend impacts our connection to the earth and the theological stories of God’s creative handiwork. My mother was fond of reminding me I grew up watching TV at night while she grew up watching the moon at night in the corn field. The Genesis stories of creation tell a story of humanity’s connection to the dirt of the land.  Out of it, says the story, we came.  And, back to it we will go, placed in the new dirt of eternity. In between, the story gives us the task of tilling and keeping the dirt, the dirt from which we came and the dirt to which we will go. That connection, it seems, should lead us to a renewed commitment to the earth.  Do you recall a moment in which you felt particularly connected to the earth and God’s creation?  As you read the story of Genesis 1 and 2 this week, take a walk, look outside, re-connect yourself to the beauty of the spring time.

"Reconnect me, O God, to the beauty of your creation.”